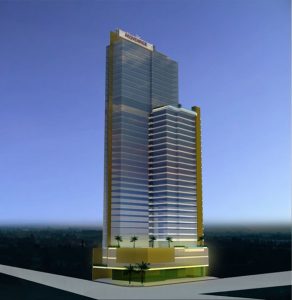 Manila (Philippines) – December 21, 2017 (travelindex.com) – Movenpick Hotels & Resorts has signed a new property in Manila, expanding its portfolio in the Philippines to three properties strong, and marking another milestone in the company’s Asian expansion strategy.

Due to open in Q4 2021, Movenpick Hotel & Residences Quezon City will feature a combination of 350 contemporary hotel rooms and suites and 250 stylish residences. All 600 units will offer state-of-the-art technology and upscale amenities, making the hotel ideal for both short and extended stays in Quezon City.

Located in Metro Manila, and featuring a business centre and extensive meeting space, the modern hotel is expected to appeal to leisure and corporate guests, as well as groups.

“The Philippines, which is emerging as one of the world’s fastest-growing economies, is a target development market as we continue our expansion drive across Asia,” said Andrew Langdon, Global Chief Development Officer, Mövenpick Hotels & Resorts.

“Manila has been on our radar for some time and Mövenpick Hotel & Residences Quezon City, located in one of the country’s more important commercial centres, affords us the perfect opportunity to leverage the capital’s growing prosperity while showcasing our Swiss hospitality style and exceptional facilities.”

Property highlights also include a swimming pool and fitness centre, plus four function rooms and a large pillar-free ballroom, all fitted with the latest audio-visual technology and designed to host successful conferences, conventions, product launches or social events.

Book your Movenpick hotel in Manila Quezon City, the Philippines and around the world at best rates available. Pay at the hotel. Book now at HotelWorlds.com!

About Movenpick Hotels & Resorts:
Mövenpick Hotels & Resorts, an international upscale hotel management company with over 16,000 staff members, is represented in 24 countries with 83 hotels, resorts and Nile cruisers currently in operation. Around 40 properties are planned or under construction, including those in Kuredhivaru (Maldives), The Hague (The Netherlands) and Basel (Switzerland). Focusing on expanding within its core markets of Europe, Africa, the Middle East and Asia, Mövenpick Hotels & Resorts specialises in business and conference hotels, as well as holiday resorts, all reflecting a sense of place and respect for their local communities. Of Swiss heritage and with headquarters in central Switzerland (Baar), Mövenpick Hotels & Resorts is passionate about delivering premium service and culinary enjoyment – all with a personal touch. Committed to supporting sustainable environments.