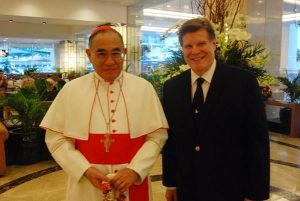 Bangkok (Thailand) – April 5, 2017 (travelindex) – On Tuesday 21 March, Arnoma Grand Bangkok was honoured to welcome His Eminence Francis Xavier Kriengsak Kovithavanij, Cardinal, Archbishop of Bangkok, and His Excellency Archbishop Tschang In-Nam, The Vatican Ambassador, along with a host of Bangkok based Ambassadors and VIP Guests, to a Reception at Arnoma Grand Bangkok to mark the Anniversary of the Pontificate of His Holiness Pope Francis.

Over 300 Guests attended and listened to speeches from His Excellency Archbishop Tschang In-Nam before toasting to the happiness and long life of His Majesty King Maha Vajiralongkorn Bodindradebayavarangkun, King of Thailand. And to His Holiness the Pope Francis.

About Arnoma Grand Bangkok
Arnoma Grand Bangkok is part of the Arnoma Hotels and Resorts Group and a sister property of the The Felix Kanchanaburi which will eventually be rebranded as Arnoma Resort in Kanchanaburi. With its unrivalled location close to many of Bangkok’s premier office towers, within walking distance of some of Bangkok’s best shopping choices, with 369 Rooms and suites and state of the art meeting facilities suitable for meetings and functions of all types, Arnoma Grand is one of Ratchaprasong’s iconic properties.